Wooden skyscrapers could be the future for cities | The Economist

an ambitious and innovative solution to the problems posed by urbanisation.

By 2050 the world’s population is expected to soar to almost 10 billion people and two-thirds of us will live in cities. Space will be at a premium. High-rise offers a solution.

But concrete and steel – the materials we currently use to build high – have a large carbon footprint.

An answer might lie in a natural material we’ve used for millennia. Throughout history buildings have been made of wood. But it has one major drawback. It acts as kindling. Fire destroyed large swathes of some of the world’s great cities. But by the early twentieth century, the era of modern steelmaking had arrived. Steel was strong, could be moulded into any shape and used to reinforce concrete. It allowed architects to build higher than ever before. So why, after more than a century of concrete and steel, are some architects proposing a return to wood?

Concrete and steel are costly to produce and heavy to transport. Wood however can be grown sustainably and it’s lighter than concrete. And crucially, as trees grow, they absorb carbon dioxide from the air, locking it into the timber. Regular timber isn’t malleable like steel or concrete, and isn’t strong enough to build high. But engineers have come up with a solution.

It’s called cross-laminated timber, or CLT for short. CLT is light and it’s comparable in strength to concrete and steel. But how does it cope when burnt with a high heat source?

London architects Waugh Thistleton are already designing buildings with this new kind of timber. Andrew and his colleagues designed Britain’s first high-rise wooden apartment block and have recently completed the world’s largest timber-based building. Behind these bricks is a timber core, made from more than 2000 trees, sourced from sustainable forests.

And this London practice is not alone in advocating the use of CLT. Ambitious wooden high-rise buildings are also being constructed in Scandinavia, central Europe and North America. As yet, nobody has used CLT to build beyond 55 metres. But Michael Ramage’s research centre in Cambridge, working with another London practice, has proposed a concept design of a 300-metre tower, that could be built on top of one of London’s most iconic concrete structures – the Barbican.

Making that jump in height will be a difficult sell. The cost of building wooden skyscrapers is largely unknown, but those costs could be reduced by prefabricating large sections of buildings in factories. And city-dwellers will need to be persuaded that CLT does not burn like ordinary wood.

As an attractive, natural material, wood is already popular for use in low buildings. If planners approve, it could rise to new heights. 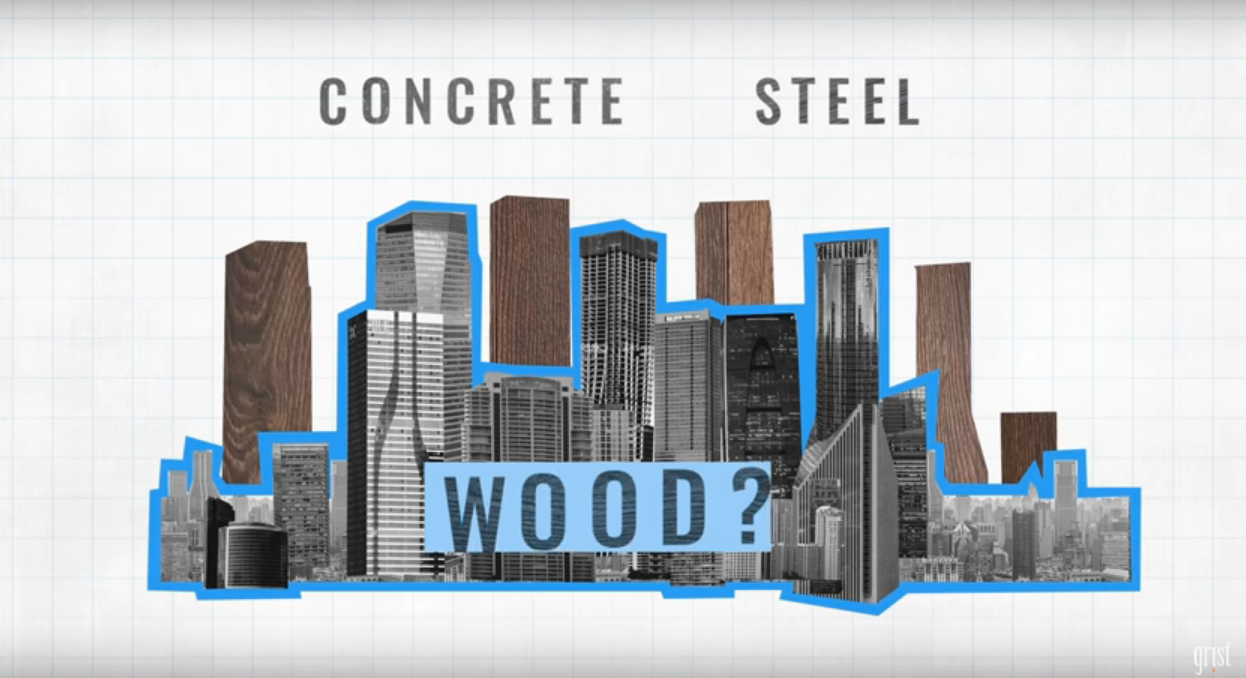 The future of skyscrapers | Grist

How much CO2 would a skyscraper save if a skyscraper was made of wood? Wooden skyscrapers are already a thing in Europe and Canada. Now, they're becoming more popular in the U.S. How do they work and what do they mean for the future of cities?